NDR Das! reports on the villa saviours of Binz, Oktober 2015
Thanks to our press release and our support, NDR is making a film on the spa architecture of Binz. Three committed villa saviours were portrayed on the occasion of 25 years of German reunification and that was accesible to 500 000 viewers.

DPA accepts our press report on bathing in Boltenhagen, October 2015

Our press report is online and in the printed media in the whole of Germany, including on Focus.de.Süddeutsche.de, n-tv, and der Westen, amongst many others.

Kühlungsborn in DB Mobil, August 2015
Our press release about the“Dragon Grand Prix“ and “Dragon Gold Cup“ sailing competitions at the Baltic Sea resort of Kühlungsborn was printed – including the photo- in the August edition of DB Mobil, the railway passengers’ customers magazine. There were also numerous print and online results throughout Germany.

Luis, the children’s reporter on Offaehrte Language holidays, August 2015
Luis (12), from Aumühle near Hamburg, went to Exeter for the children’s editorial department of the Schleswig Holstein newspaper to test whether English lessons in holidays are really fun. >> Go to SHZ online

Our text printed as coverage by Bild Zeitung, July 2015
Our coverage – including photos – of villa owners in Binz, on the occasion of 25 years German reunification, was printed by the Bild newspaper in Mecklenburg Vorpommern on half a page of its newspaper.

Cyclists’ get-together in Boltenhagen, July 2015
The press release about social activities for hobby cyclists on the occasion of the German national cyclists’ get-together in Boltenhagen  at the end of July was printed everywhere in Germany, including in the HNA Kassel (a half a million edition) in Westfälische Nachrichten, Mitteldeutsche Zeitung and in the Sächsische Zeitung in Dresden. There were also numerous online results, including the ones on Der Westen.de (13.661.257 visits). 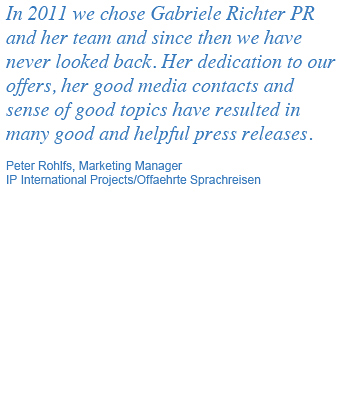